THE DEVON REX – “…of unique appearance…, with a characteristic Elﬁn look…”

Anita White and her mother, Marion learned about the Devon Rex when the family was posted in England as part of a military assignment. They returned to the US, and in 1968, in Texas, they started the ﬁrst U.S. breeding program for the Devon Rex.

In 1969, Shirley Lambert, of Bob’N Shir Cattery, imported Hesperian Orchid and Wigmel Telaman to her home, also in Texas. They were both seal-pointed Devons, and were the ﬁrst pointed Devons in America. The Whites and the Lamberts imported a few more Devons, and together they worked with a combined breeding pool of 8 cats. (A more detailed history of the breed can be found at the CFA website,) Anita was an artist, and her drawing of the ideal Devon, also called the Breed Standard, were used as a guide by many in the early years of the breed. Her drawings are still regarded by the Devon Rex Breed Club as visionary and ideal of the breed. Anita White’s drawings are used to educate judges about the proper look of the Devon today. In the illustrations here, a GIF animation shows the proper Devon appearance laid over the less desirable characteristics, so that you can see the difference.

The Devon Rex head is quite unique and accounts for the most points in the judging of these cats. The ears are prominent and are set down and to the side. They are often described as “jug handled” ears. Ears can be set too high, or they can be too narrow or too small. This can happen when a breeder is using an outcross breed, or when a breeder is overbreeding in cats who have poor form. (This often happens when breeders are breeding for income rather than for the future of the breed.)

The ears should not ﬂare, as they do in other breeds (the Siamese). Instead they extend up, and have rounded tips.

Also the shape of the head is important. The head can be too short or too long.  Here is a diﬀerent view of the proper Devon head shape. 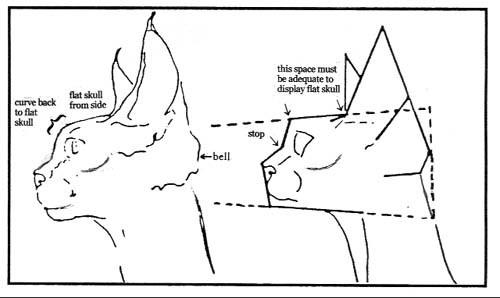 Notice that there is a clear chin in line with the nose and the forehead curves back to the ﬂat skull. The head should be ﬂat on top, and the nose break should be evident. A nose break that it too strong or too straight is not desirable.

Judges and breeders look for 3 proper curves when looking at a Devon head – the base of the ear, prominent cheekbones and a clear whisker break. 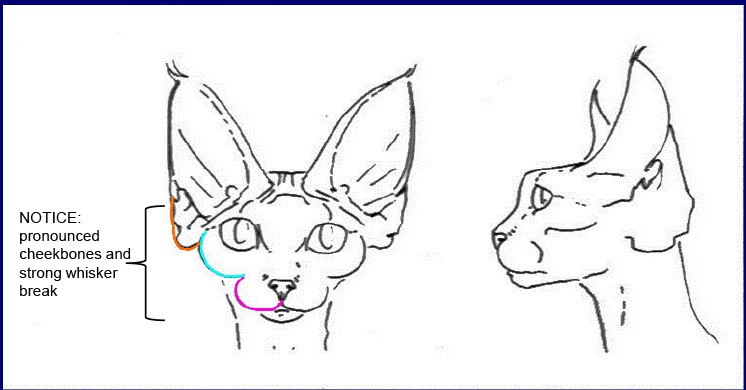 The Devon whisker pads should be prominent. Whiskers can be straight or curly. The eyes should be large, oval and wide-set.
The coat should be lush, soft and curly. The hair is short, not shaggy, and the curl is loose and felt when the cat is stroked.
The body is lithe, and the Devon’s back legs are slightly longer than the front legs.

The neck is of medium length and slender, to provide the ideal setting of the gorgeous Devon head!
Anita White helped deﬁne the Devon Rex as we know the cat today. We have her to thank for clarity of the ﬁne points in understanding exactly what makes a Devon Rex so very unique.

Remember – Your Devon is just perfect! These standards are the measure by which judges evaluate purebred show cats, and the guide for responsible and ethical breeders.

More information about the Devon Rex Standard can be found at the CFA website, or the FIFe website.